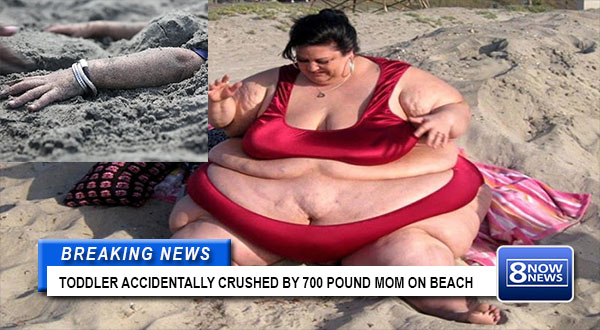 Venice Beach, CA –  Fun in the sun turned tragic after a three-year-old boy was crushed to death and suffocated by his 700 pound mom during a game of ‘bury me in the sand.’ Linda Myers, 32, was enjoying a day at Venice Beach with a group of 20 people on Monday. Meyers said she got up to put her feet in the water and cool off for a bit, then returned to her spot in the sand. After looking around for her boy for nearly 5 minutes, she motioned several people over to her, asking if they had seen little Timmy. Concerned friends went looking for the boy as Myers sat in her spot keeping an eye out for him.

“It’s hard for me to walk, so I could not join in on the search,” said Myers. “Then four of Timmy’s friends came over and said they were playing bury me in the sand. They said they buried him right next to my beach towel. Then I looked down and I saw arms and little fingers coming out from the sand. Oh my God, I was sitting on my little Timmy! I rolled right off of him as quick as I could. But it was too late.”

It is estimated that Myers was sitting on her three-year-old boy for nearly 8 minutes. The toddler didn’t have a chance, and died of suffocation. The boy’s death is being ruled accidental and Myers is not being charged with any crime. “The only crime I committed is being obese,” said Myers. “I don’t know if I can never forgive myself.”