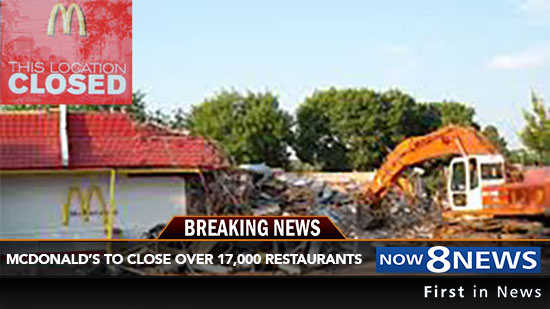 The largest chain of fast food restaurants in the world has announced that the minimum wage increase from $8.75 an hour to $15 an hour has caused them to schedule the close 17,000 restaurants in the United States. With already decreasing profits, McDonald says this is the “straw that broke the camels back.”

Restaurant closures will begin November 1, 2015 with the first set of franchise closures in New York. McDonald’s plans to close over 17,000 restaurants by April 1, 2016. In a statement on Monday, New York City Mayor Bill de Blasio complained that the State of New York is already subsidizing fast food workers with $700 million in public assistance.

“That is tantamount to a government subsidy for multibillion dollar corporations that certainly don’t need the assistance,” he said in a transcript. “And to those on the right that say government assistance like welfare robs recipients of their dignity, here’s an easy way to remedy that problem: make sure workers get the wages they deserve. Raising the minimum wage to $15 an hour will give governments more resources to invest in the things that improve all of our qualities of life like education and infrastructure.”

However, multibillion-dollar corporations like McDonald’s are not willing to flip the bill by nearly doubling their employees wages. Their profits would decrease, paying what they call “uneducated and under-qualified” employees more money than college graduates.

McDonald’s stand is this: Force them to overpay their employees, and they will take away your right to eat a Big Mac and Apple Pie! So who’s lovin’ it now?