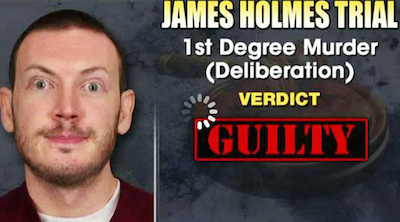 News 8 – Colorado theater shooter James Holmes was found guilty Thursday on all 165 counts against him in the chilling 2012 attack on moviegoers at a midnight Batman premier that left 12 people dead and dozens of others wounded.

Jurors swiftly rejected defense arguments that the former graduate student was insane and driven to murder by delusions.

The 27-year-old Holmes, who had been working towards his PhD in neuroscience, could get the death penalty for the massacre.

It took an hour for Judge Carlos A. Samour Jr. to read the 165 guilty counts in front of a crowded and emotional courtroom. Family members sobbed as their loved ones were named and several jurors cried as each verdict was announced.

Meanwhile Holmes, dressed in a blue shirt and beige khakis, stood impassively as Samour read charge after charge, each one punctuated by the word “guilty.”

The initial phase of the trial took 11 weeks, but it only took jurors about 12 hours over a day and a half to decide all 165 charges. The same panel must now decide whether Holmes should pay with his life.