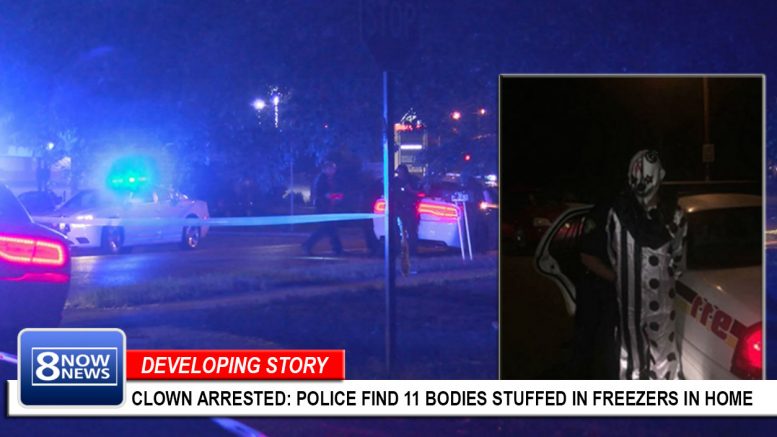 Creepy Clown Arrested Police Find 11 Bodies Stuffed in Freezers: Douglas Harrison, a 42-year-old resident of Memphis, Tennessee, was arrested in connection with a series of dead bodies found in freezers located in his shed. According to reports, the bodies were dressed in clown costumes with their decapitated faces covered in clown makeup. The Memphis coroners office made the gruesome discovery after several 911 calls were placed by neighbors regarding their concerns of suspicious activity at the residence.

At approximately 8 PM, police were dispatched to the 800 block of Polk Avenue. Authorities knocked on the door of the residence and were met by a male, dressed in a clown costume, who appeared to be in his late 30s to early 40s under the influence of drugs. Police described the man’s residence as smelling like “cotton candy and death.” Inside the home was covered wall-to-wall with circus decorations and the sound of circus music could be heard throughout the home.

During further search of the residence, officers were led to a shed where they found several freezers secured with locks and chains. After cutting off the deadbolts, they found 7 decapitated bodies stuffed in 4 freezers and their heads placed in zip lock bags in another freezer. Each face was meticulously painted as if done by a “professional artist.”

In the shed, they found a tunnel which led to the house, full of several clown suits and maps of the city with places marked by the suspect that he intended to strike next. Harrison was taken into custody and charged with multiple counts of homicide. He is being held on no bond.