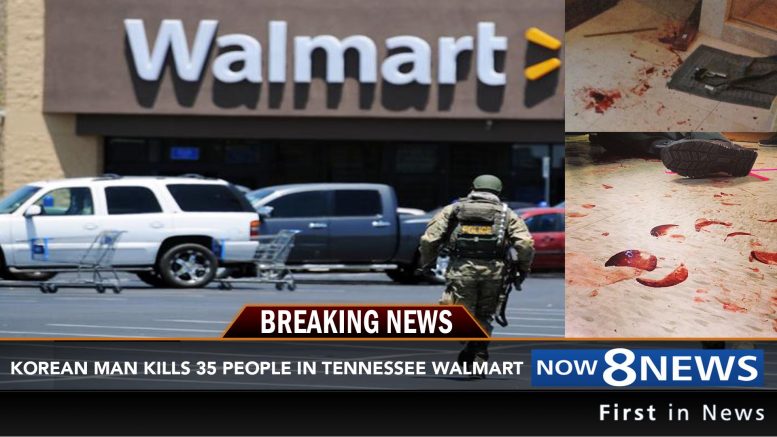 Just one day after North Korean leader Kim Jong-un and his totalitarian regime announced their government’s ban of sarcasm, backlash has erupted in the United States. 38-year-old Hoon Seunh-hee, entered a Tennessee Walmart shopping for a rice cooker when he approached a Walmart employee asking where the item was located. According to eyewitnesses, that employee replied “Like you don’t already have one?” then laughed and pointed him in the right direction. Seunh-hee walked over to the next aisle, pacing back and forth as if contemplating something.

“He seemed very, very angry,” said Tara Lee, who witnessed the entire incident. “I got a real bad vibe so I started to walk in the other direction. That’s when I saw him pull out a handgun and start shooting. It was awful! I hid in the clothes rack because I didn’t know what to do.” Seunh-hee shot 38 people, with only three survivors. A man with a concealed weapon was able to stop Seunh-hee with one shot to the head. Investigators say the incident was sparked by the announcement of the “sarcasm ban” put into effect last week in North Korea. “Apparently this deranged lunatic forgot he was in America,” said Lieut. Ronald Murphy. “He tried to bring the rules of North Korea over here, and we don’t play that in America. It’s unfortunate that 35 people had to lose their lives today. However, the gunman was executed and we have one less maniac to worry about on American soil.”

This incident comes just hours after North Korea announced they have successfully tested a nuclear warhead. North Korea says it has hit the button on their 5th and potentially most powerful nuclear weapon Friday morning, detonating a nuclear warhead that could be mounted on ballistic rockets. Not good news for the world.