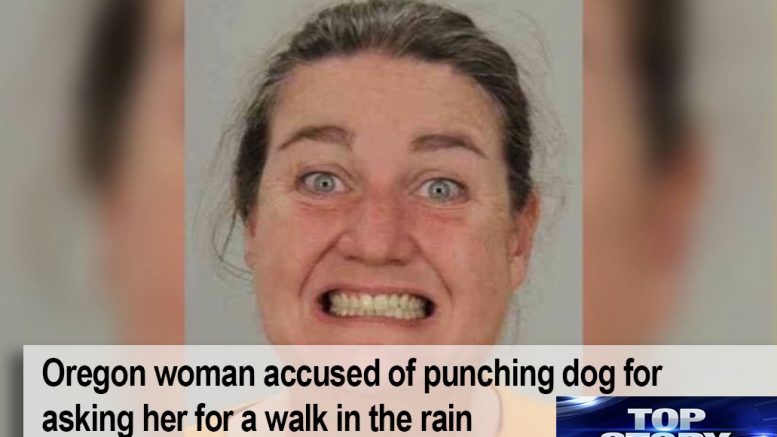 An Oregon woman was busted by cops after she punched her dog, Stitches, in the face — 20 times — while arguing with the dog. Police say she was tired of Stitches asking her to take him for a walk in the rain.

The suspect, 38-year-old Melissa Sue Morris, allegedly socked her dog in the face 20 times on New Year’s Eve at about 6:15 p.m. at her home in Myrtle Point.

Morris punched him because, according to Morris, he wouldn’t stop “asking” her to take him for a walk.

“That selfish ass dog wants EVERYTHING from me,” Morris said. “When he’s hungry who does he ask for food? ME! When he has to piss who has to let him out? ME! And oh, now you want me to take your dumb ass on a walk? Well it’s raining buddy, stop asking!”

Morris stated that she communicates with the dog telepathically and she is tired of listening to him whine and complain about his life and his problems. She said sometimes he speaks to her in Spanish just to “annoy” her.

Officers who responded to the scene noticed marble-sized welts and a scratches on his face.

Morris was arrested on an animal assault charge.