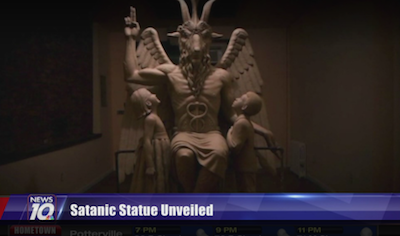 News 8 –  In an effort to make a statement against religious monuments on government property, members of the Satanic Temple of Detroit unveiled a statue of a goat headed winged statue in Detroit on Saturday night. The 9 foot tall bronze statue of Baphomet made its public debut at a ticketed events in an industrial building near the Detroit River. The monument was revealed shortly before midnight as hundreds of supporters cheered and chanted “Hail Satan.”

Members of the Satanic Temple of Detroit viewed the unveiling as a victory “a celebration of a group effort” that has taken several years to complete. Not all Detroit residents were as pleased. The statue has been a point of contention in the Motor City for months, and demonstrators against it continued up until the last minute. Around 100 protesters turned out Saturday afternoon to pray and denounce the monument, calling it “disrespectful” to other religions.

Jex Blackmore, the director of the Satanic Temple of Detroit, says this backlash is the product of years of “deep misunderstanding” about Satanism. “Satanism and the term Satanic has been used as a political tool to demise individuals who have rebelled against systems of authority and power,” Blackmore said any heated segment of WJBK TV’s “Let It Rip.”

The Satanic Temple of Detroit is non-theistic and does not celebrate the Judeo-Christian representation of Satan, Blackmore said. The group’s website to find Satan as “a symbol of man’s inherent nature, representative of the eternal rebel, enlightened inquiry and personal freedom rather than a supernatural deity or being.”

The Temple originally applied for the statue to be installed in 2012 near the 10 Commandments monument on the Oklahoma state capitol grounds. After that application was denied, the Temple decided on Detroit, where the Satanic Temple is said to have a stronger than average congregation.