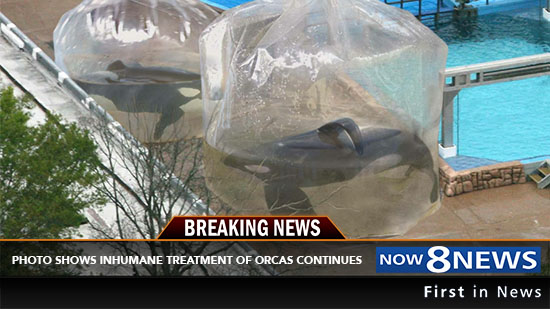 Just as SeaWorld announces they will end their killer-whale show at it’s San Diego property, another controversial image is captured on film. Employees at the Southern California location snapped this photo that shows the inhumane conditions these Orcas are put under during tank cleaning. One employee calls it, “barbaric and heartless” as she describes the screams that the whales let out while they are trapped in these plastic bags.

“And they cry nonstop, as if they are screaming for their lives,” said a SeaWorld employee who wishes to remain anonymous. “It tears our hearts apart because they are so stressed out. You can see their breathing get faster and faster until sometimes they lose consciousness from fear. It’s the most inhumane thing I’ve ever seen, but they refuse to do it any other way. They say it is ‘procedure.’ I say it’s torture.”

SeaWorld has suffered in the wake of the 2013 documentary Blackfish, which raised questions about the treatment of Orcas and their interactions with trainers at the company’s parks. By the looks of this photo, not much has changed when it comes to the treatment of the Orcas. SeaWorld executives have been “unavailable” for comment.