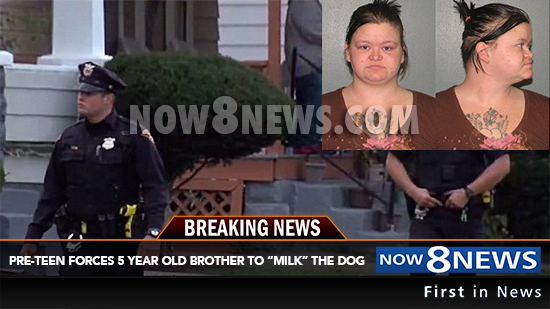 NEWS 8 –  A five-year-old boy is now in the custody of Child protective services after his older brother convinced him to “stimulate” the family dog. The older brother, age 12, convinced the little boy to “milk the dog” for his breakfast cereal. Unfortunately for the child, the family dog was male, and what came out was not milk.

In a transcript released by Child Protective Services, the boy recalls the incident which happened early Tuesday morning: “My brother was really excited. He told me ‘come on, come on, you’ve got a check this out!’ He told me if I wanted milk with my cereal, I had to go with him and get it. He told me what he was about to show me was really, really cool and I could be like the farmers I see on TV. He told me to yank on the thing on my dog and milk would come out. To me a looked like pink lipstick, but I did it anyway.”

According to the minor child, the “milky substance” that came out squirted him in the eye and he began crying. Neighbors came out to see what was going on, and they could not believe their eyes. “I heard little Timmy screaming, so I went over to help because I thought maybe the dog bit him since I saw them wrestling around,” said Lisa Craig. “When I got over there, I realized what happened, and called the police. That was a cruel joke for his brother to play on him and if the mom is going to let that bully brother babysit him, she doesn’t deserve to have her kids.”

The five year old boy was taken into the custody of Child Protective Services and the 12-year-old brother was put in juvenile detention. The pre-teen is being charged with forced sexual conduct of beastiality with a minor child and animal abuse. The mother was also arrested for child neglect.