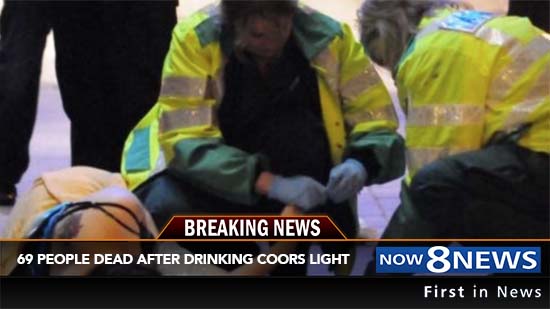 Mobile, Alabama –  At least 69 people died over the weekend in Alabama after drinking Coors Light beer. The mass poisoning occurred when people who attended the funeral on Friday at a Mobile, Alabama Cemetery fell ill, with the first seven fatalities confirmed on Saturday morning.

“As we prepared to determine the cause of death of the people, we began to receive a lot of people with diarrhea and other muscle aches. After that, we began to receive dead bodies from several neighborhoods,” said Paul Bernard, the head physician at Providence Hospital. Bernard said at least 169 people remain in the hospital recovering from the incident.

Samples of the beer and suspicious objects that were found inside the cans have been sent to the ACT Laboratory for testing. These results are still pending. If you think you may have come in contact with this tainted beer, and have symptoms of diarrhea and muscle aches, discard the beer and go to the hospital immediately.