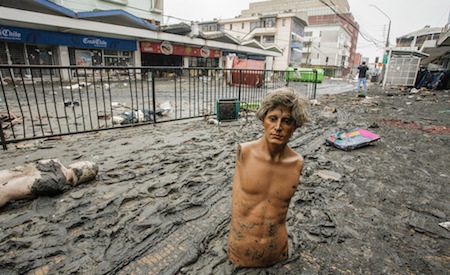 The effects of the tsunami in Talcahuano, a port city near the epicenter of the earthquake in Chile, are disastrous as an ocean wave reached the central plaza, almost a kilometer inland.

News 8 –  Advanced planning and authorities quick reaction to a powerful 8.3 magnitude earthquake minimize the severity of the disaster that struck off the coast of Chile, triggering a nearly 16 foot wave on the shore in the Coquimbo Region. About 1 million people evacuated ahead of this tsunami wave. Authorities said at least 10 people died and one person is missing. The quake hit Wednesday night, with its epicenter 29 miles west of Illapel, according to the US geological survey.

Some of the fatalities occurred in Illapel, where homes sustained much of the damage. Under Sec. of the Interior Mahmud Aleuy told CNN Chile that the government sends its condolences to the relatives of the victims. Before heading to the scene of the earthquake, Pres. Michelle Bachelet told reporters, “The response to this earthquake has been very efficient, and we took the right measures.”

Delays coast is prone to earthquakes, and the country has a long history of large quakes, according to Randy Baldwin, a US geological survey geophysicist. “They’ve had a lot of experience,” Baldwin said, noting a strong monitoring of quake activity and the retrofitting of buildings to minimize harm.