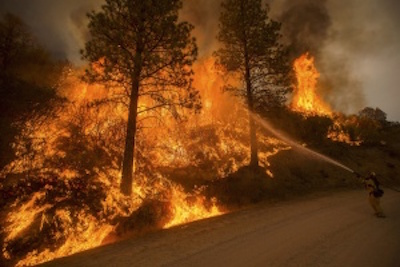 News 8 –  At least one person has died in the raging Valley Fire outside Middleton, California, according to the director of the state’s office of emergency services. Mark Ghilarducci said officials don’t have any reports from the public about anyone unaccounted for but have only been able to confirm the death and are working together more details as thousands in Northern California continue to flee their homes.

“We just came on down. I mean, we can stay there, that’s for sure,“Cobb resident Joyce Reim told CNN affiliate KGO. “we were stuck in the middle of the fire for a while and can go either way.” Authorities ordered mandatory evacuations for Middletown, Harbin Hot Springs and Big Canyon Road. More than 5000 are without power, according to Cal Fire.

The Valley Fire, west of Sacramento, roared to life over the weekend. It quickly spread to 50,000 acres by Sunday night. More than 1000 firefighters were trying to contain the blaze. Families took what they could as the flames raced towards them, but many memories were left in ashes as 400 homes burned, fire officials said. The Inferno brought action from Gov. Jerry Brown, who declared a state of emergency in Lake and Napa counties.

The governor’s move will expedite debris removal and waive fees to replace essential documents like birth certificates for those who’ve had to abandon their homes and belongings.