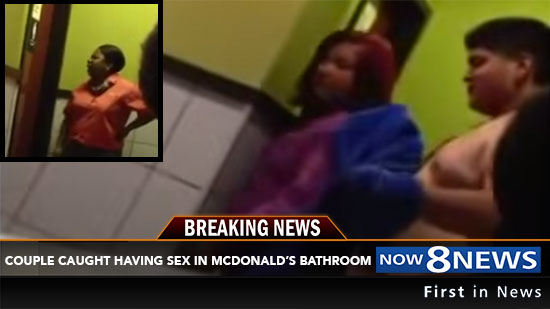 News 8 – A couple was caught in a New Jersey McDonald’s conducting “inappropriate behavior” in the restaurant’s bathroom. Customers complained of loud “noises” coming out of the bathroom that sounded like screeching and screaming. Patrons at the restaurant began recording the incident. The manager, Reneé Reynolds, banged on the door for nearly an hour trying to get the couple to come out.

“I was banging on the door telling them that if they did not come out right now I was going to call the cops,” Reynolds recalled as she explained how the incident unfolded. “After nearly an hour they finally opened the door and this dude comes out with no shirt! I told them if that bathroom smells like p*ssy, I was calling the cops and pressing charges!”

According to Reynolds, the couple did leave peacefully and no other incidents occurred. Reynolds said she opted not to call the police, because she already wasted an hour of her day trying to get them out of the bathroom.  “I’m not going to waste my time waiting for these cops to show up,” she told Now 8 News. “They left, and that’s all I wanted.”