News 8 –  The mustard hue of the Animas River in Colorado – the most visible effect of a mistake by the Environmental Protection Agency that dumped millions of gallons of pollutants into the water – is striking. Just a glance at a photo of the orange yellowish slush is enough to know that something seems wrong. Scientists will have to say just how wrong, and possibly dangerous, the contamination is, though five days after the spill answers are few..

The EPA, which cause the accidental release of the contaminants Wednesday, said it continues to monitor the river. “Collection, transportation and lab analysis of metals in water is complex and time-consuming,” the agency said in a statement. Cities in New Mexico are also at risk as pollution flows from the Animas River into the San Juan River. A flyover with a specialized aircraft showed that the conditions on the Animas and San Juan rivers between Durango, Colorado, and Farmington, New Mexico, have improved, the EPA said.

According to the EPA, the spill occurred when one of its teams was using heavy equipment to enter the Gold King Mine, a suspended mine near Durango. Instead of entering the mine and beginning the process of pumping and treating the contaminated water inside as planned, the team actually caused it to flow into the nearby Animas River.  Officials said they believe the spill carried heavy metals – mainly iron, zinc and copper – from the mine into a creek that feeds into the Animas. Wednesday’s spill caused a spike in concentrations of total and dissolved metals in the water, the EPA said. 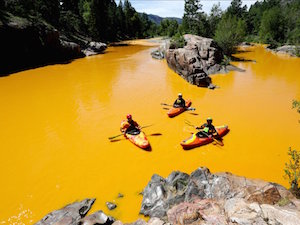 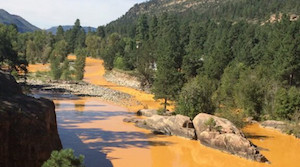 “These concentrations began to return toward pre-event conditions” by Thursday, the agency said, adding that the results of additional tests carried out over the weekend will show whether that trend continues. The EPA has collected water samples from nine locations along the San Juan River where there are water intake plants. “This is a real devastating spill,” said Kim Stevens, director of the advocacy group Environment Colorado. “We’ve been hearing from rafting companies and other businesses that rely on the river that if they can get clients out on the river in the next couple of days, they may have to shut their doors.”

The rivers ecosystems are also at risk, she said. “The fish population is especially very sensitive to water contamination, and we really won’t be able to see what the impacts are until all of the pollution has run its course. Time will tell what the true impacts are,” she said. The city of Durango and La Plata County, Colorado, have declared a state of emergency because of the spill. The EPA and the New Mexico Environment Department said they will test private domestic wells near the Animas to identify metals of concern from the spill.