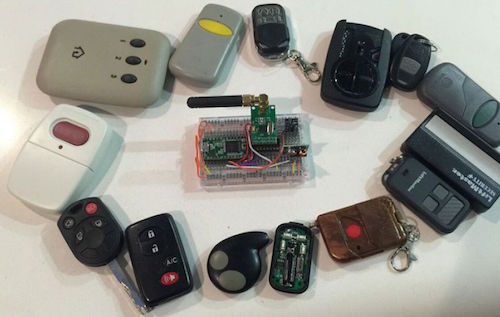 News 8 –  Your remote car key isn’t a key. It’s billions of them. It doesn’t have just one secret code to your car. That would be too easy for someone to electronically intercept, copy and use. Instead, your car key uses what’s known as a “rolling code.” Every time you press the button, a new, randomly generated code is sent over a radio frequency to your car, which has a secret eyes code generator recognizes it and then burns it so it can never be used again. The key and the car then create new codes for the next time around, and the process repeats.

In case the two ends get out of sync – say your kids grabbed the keys when they’re out of range and press the button a bunch of times – the car can recognize a few hundred future codes. When it receives one of them, it disables all prior ones. It’s a proven system that secured tens of millions of cars and remote garage door openers for years. And now it may be useless.

A white hat hacker Samy Kamkar, who last week cracked GM’s OnStar smart phone apps security and demonstrated his ability to illicitly unlock and start a car over a cellular network, has developed a device made from $20 worth of parts that he calls the RoleJam, which does exactly what its name implies. Kamkar tells FOXNews.com that when someone tries to use a remote key, the device copies the code and jams the signal so the car doesn’t receive it. When the user clicks his remote again, the device sends through the original code as it captures the new one, giving the attacker a valid code to use as he pleases.

The RollJam It is small, not much larger than the remotes it emulates, and can likely be further miniaturized. The only caveat is that it needs to be within range of the key’s transmission to work, but that is often more than 50 feet. It needs to be programmed for the specific security system it’s attacking, but many brands use the same suppliers and Kamkar has tried it out successfully on several. He admits there may be newer verification protocols out there that he can’t beat, but he’s yet to encounter one, and that still leaves older cars and garage doors vulnerable.

Kamkar will reveal more technical details on RollJam and his OnStar exploit on Friday at the Def Con 23 Hacker Conference in Las Vegas. The conference will also feature a car hacking village, where you can find out all the other ways your car is insecure.