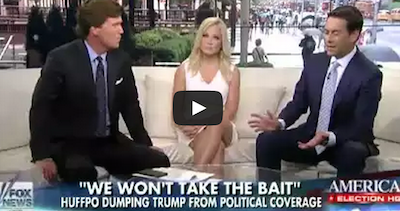 News 8 –  The Huffington Post announced Friday that it will no longer covered Donald Trump’s 2016 presidential campaign as a political story, instead relegating the current GOP front runner to the entertainment section. “Our reason is simple: Trump’s campaign is a sideshow,” Huffington Post editorial director Danny Shea and Washington Bureau chief Ryan Grim wrote. “We won’t take the bait. If you are interested in what the Donald has to say, you’ll find it next to our stories on the Kardashians and The Bachelorette.”

Trump fired back, calling the liberal news site a “glorified blog” and touting his poll numbers. “If you read previously written tweets, Mr. Trump has never been a fan of Arianna Huffington or the money-losing Huffington Post,” the Trump campaign said. “The only clown show in this scenario is the Huffington Post pretending to be a legitimate news source. Mr. Trump is not focused on being covered by a glorified blog.”

“News organizations cover what happens, whether they like it or not,” Tucker Carlson said on Fox and Friends Weekend today. “And those who refuse to are not news organizations. A lot of people don’t like him, but it doesn’t make him any less a real news story. Were not in charge of making the news, we merely cover it.”