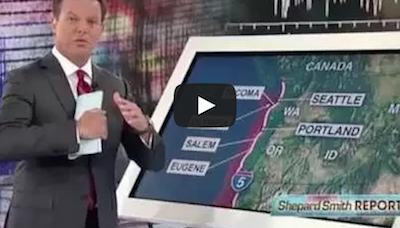 News 8 –  A new report predicts that a mega-earthquake could kill an estimated 13,000 people and destroy a sizable portion of the Pacific Northwest. Even more disturbing, it’s overdue. The New Yorker reported that FEMA calculations show these types of earthquakes happen at regular intervals in this specific part of the world, roughly every 240 years. The last one was more than 300 years ago, in 1700, when the quake there sent a 600 foot wave of water all the way to Japan.

Michio Kaku, A physicist and professor at city College of New York, told Shepard Smith today that the troubling article does not overstate the danger. “The Cascadia fault is an earthquake waiting to happen,” Kaku stated. “We know it’s going to happen with an energy 30 times the maximum energy of the San Andreas fault.”

Kaku Said Hollywood has “brainwashed” people into thinking that California is where the next massive earthquake will hit. He added before the mega quake actually hits, there is a compression wave that is dedicated by animals. “Animals start to act very strange. We’ve seen that happen before earthquakes,” Kaku said. “And then, a minute, two minutes later, boom!”

The massive quake, with the magnitude of up to 9.2, would last about four minutes, according to seismologists, with a wall of water following about 15 minutes later. Kaku Said he’s concerned that many of the 70,000 residents in the potential “inundation zone” have very little knowledge about the risk.

“It barely rates on the radar screen,” he said.

Shepherd asked Kaku whether he would live in the Pacific Northwest if he had children. “I’d think twice,” he said, advising residents to educate their children on emergency preparedness and what to do in case of an earthquake.