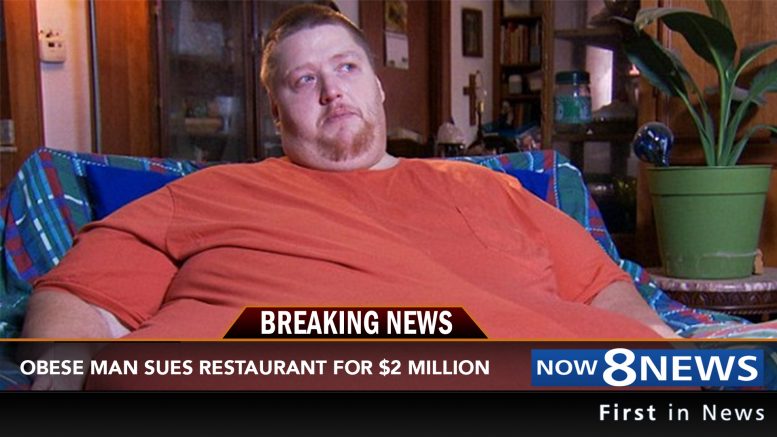 A man from Massachusetts is suing Golden Corral Corporation for $2 million, for false advertising, after being thrown out of one of the chain’s restaurants by employees. According to witnesses, the 51-year-old man, Albert Flemming, a welfare recipient, was expelled from the restaurant after he spent more than seven hours on site eating over 50 pounds of food.

Despite the fact that the restaurant advertises as “all-you-can-eat,” the manager of the establishment seems to have lost patience at some point, telling him that his meal would be free but asking him to leave. The manager’s intervention angered Flemming, and a brief altercation took place before he was finally thrown out of the restaurant. Flemming called police and filed a complaint against the restaurant, and says he intends to hold the employees accountable for their actions.

“It’s a serious injustice, and I’m deeply insulted!” Flemming told reporters. “With my income, I rarely go to restaurants, so I tried to get as much as I can for my money when I do. This was the worst experience I have ever had in a restaurant. Not only did they kicked me out while I was still hungry, but they looked at me like I was disgusting, like I was not worthy to eat here! It’s unacceptable, and I demand compensation!”

The restaurant chain quickly issued a press release announcing that the decision to expel Flemming was a regrettable personal initiative from an overzealous franchise manager. They also said that some financial indemnities had been offered to compensate the damage suffered by the victim, but had been refused. Flemming confirmed that he had been offered a significant amount of money by the company, butt he is convinced that he can get more if he goes to court.