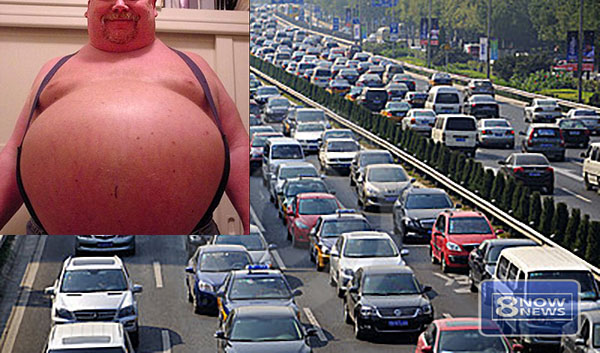 Milton Charleston and Patrick Stone found themselves stuck in traffic on a jam packed I-95, 20 miles north of Miami, Florida. According to sources, the 325 pound Charleston, having not eaten for an hour, believed he was starving to death. Police have concluded he panicked and began gnawing on Stone’s thighs, before devouring his left arm.

“They had been stuck in traffic for 20 minutes,” said police spokesperson Nelley Murphy. “Charleston, who has a voracious appetite, and needs more than 40 fast food burgers a day, felt his sugar levels dropping. It was a do or die situation.” Five minutes after chomping on his friend, traffic began to pick up pace again, allowing Charleston to take the next exit and, before taking his companion to the emergency room, was able to drive to a McDonald’s restaurant and purchase several beverages to wash down the “dry thighs” of his friend.

Friends of Charleston have stated that “he has always been a greedy bastard,” and they were not surprised that the gluttonous man resorted to cannibalism. Stone was taken to the emergency room where he later died of extensive external bleeding.