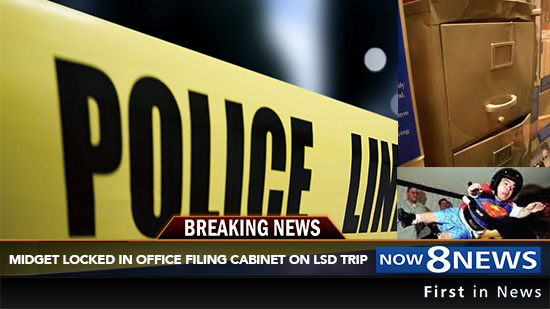 Mobile, Alabama –  An Alabama man is recovering after he suffered an incident at work that human rights activists are calling “a blatant display of hate towards a person with dwarfism.” On Friday, Douglas Harold, a 33-year-old man who suffers from dwarfism, was apparently drugged by his coworkers when they slipped some LSD in his can of Arizona Iced Tea. Exactly how this incident unfolded is still unclear to authorities, but what they have so far has police shocked by the utter disrespect for human life.

According to the victim, the last thing he remembered was laughing in the break room with several coworkers towards the end of the afternoon. Harold said he remembers feeling a bit lightheaded and decided to lay down for a minute. When he walked back to his desk, he said he noticed a “huge king-size bed and decided to take a nap.” But what Harold now knows, is what he thought was a “king-size bed” was really the filing cabinet next to his desk, a hallucination that had him trapped in his office the entire weekend.

Harold describes a trip where he soared through the air on purple unicorn, visiting strange lands full of candy canes and cotton candy. But his trip turned into horror, once the LSD wore off and he realized somebody had locked him in his filing cabinet. From Saturday evening until Monday morning, Harold describes hours of screaming and clawing at his metal entrapment. It was’t until employees arrived at work Monday morning, did they hear his cries for help. Unable to find the key, employees frantically pried open the metal cabinet and freed the man.

Police are still investigating who may have drugged the special needs man, but are looking into several leads. There was a midget tossing party Harold admitted to being a part of last week and police believe that led to this incident. Harold was taken to the hospital and treated for anxiety, shortness of breath and mild abrasions. He says he will not let this incident stop him from working with “regular sized people.”