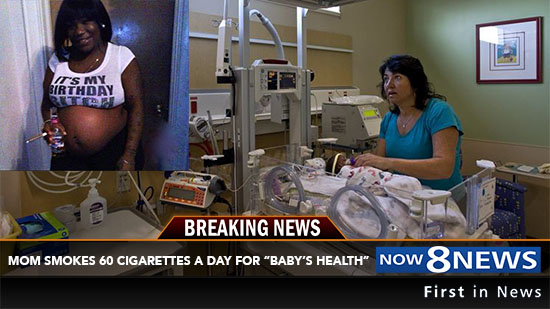 News 8 –  A young mother is bragging that she smoked 60 cigarettes a day claiming it was good for her baby and that it would strengthen the baby’s lungs. Shantai Williams gave birth to her little girl Shantaneese Williams last week, 16 days early, and says she does not regret her decision. “Smoking makes your unborn baby’s heart stronger by restricting her oxygen supply and forcing her heart to work harder,” Williams told the nurses on staff. “Her being born 16 days early is not my fault, I did the right thing.”

While pregnant, she told her social worker at the welfare department that buying cigarettes should be included in her debt ratio when figuring out the amount of money and food stamps she would be getting because she is “doing it for the baby’s health.” Unfortunately, because there is no law against smoking while you are pregnant, the social worker said her hands were tied. “Williams proudly stated that she smoked one cigarette every 10 minutes she was awake through her entire pregnancy,” social worker Jane Phillips recalled. “Every time she would come into my office for paperwork or recertification, she smelled like a nightclub.”

Williams went on to say that she was not ready to give up smoking. And if she were to give up smoking during her pregnancy, the stress of quitting would have been more harmful to the baby than her smoking. Little Shantaneese weighed in at only 2.8 pounds, which is a sign of the ill effects smoking causes on newborn babies. Williams was released from the hospital the day following her delivery. Shantaneese is hoping to be released from the, Neonatal Intensive Care Unit (NICU) within the next week or two. No charges are able to be filed on the mother as, according to police, she committed no crime.