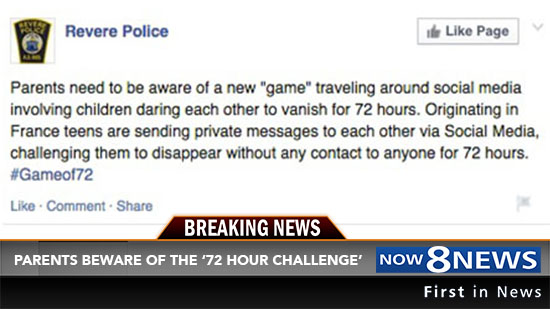 News 8 – It’s called “Game of 72” or “72 Hour Challenge” and it’s leaving parents terrified, not knowing where their children are. It dares children to disappear without telling friends or family where they are at, for up to 72 hours. Authorities were alerted to the game after a 13-year-old girl went missing for three days.

After being gone for 72 hours, the girl only known as ‘Emma’, finally turned up safe and well at her family’s home over the weekend. ‘Emma’ then refused to tell police or her parents where she had been, but only said that she had completed the ‘Game of 72′ dare. This ’72 Hour Challenge’ is causing quite a stir among police stations across the world. So far, authorities say, dozens of panicked Facebook post are being shared by parents, warning each other about the game.

The advocacy group, Against Dangerous Games for Children, said: “We urge all parents to be aware their children might be involved in this game. Children must be told it is much better to fail the game, then risk a dangerous situation and never come home at all.”