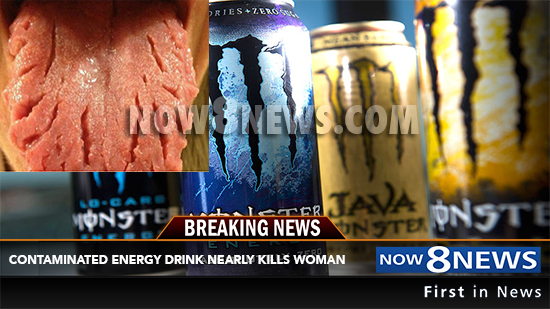 NEWS 8 –  Before you pick up another energy drink, you might want to read this. A 29-year-old mother of two was hospitalized after she drank a Monster Energy Drink which contained high amounts of a toxic chemical called Methylene Chloride, a chemical found in paint thinners. Tosha Collins stopped by her local convenience store to purchase an energy drink to help her get through her day with her two children. Often tired, Collins relies on these drinks to keeper of energy level high.

“I began drinking it as soon as I got in the car,” Collins said. “I got about five good gulps in and then my tongue really started burning. It got so bad that I ran out of the car screaming, went into the store, grab the water off the shelf and drink the entire thing. The people thought I was insane. But my tongue literally cracked in about 20 different places.”

Collins said she drove herself to the emergency room where the doctors described her situation as “chemical poisoning.” According to her medical report, Collins was exposed to a “near deadly” amount of Methylene Chloride. The hospital staff also requested a sample of her energy drink so they could test it, trying to rule out the possibility of contamination. However, the reports came back confirming their findings. The energy drink in the can that Collins had purchased contained Methylene Chloride, a solvent commonly found in paint thinners. Doctors say if she would’ve consumed the entire can, it would have killed her within hours. The incident has been reported to the health department, who is looking to the manufacturer to get answers on how this could have happened. They are suggesting a possible recall, but that will be up to the FDA to issue one. The FDA was unavailable for comment.