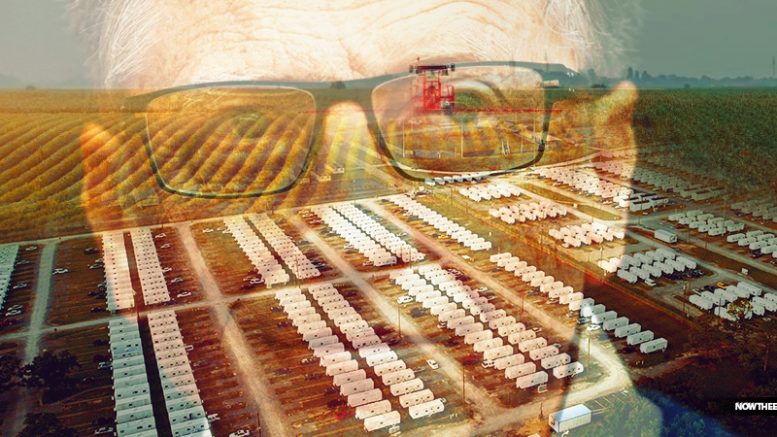 Microsoft founder Bill Gates is now the owner of the most farmland in the United States, according to Land Report. The Land Report researchers concluded that Gates, now the fourth richest man in the world, and his wife, Melinda, own 242,000 acres of farmland.

Everything Bill Gates does comes with an ulterior motive attached to it, he is not the type of personal given to spontaneous acts of anything. Gates is the world’s largest private donor to the WHO, but that $4 billion bought him the street cred he needed to pretend he’s an epidemiologist. It allowed him to become buddies with the World Health Organization to he could then use South Africa as his personal laboratory for vaccine experimentation. So why did he just make this massive purchase of US farmland?

Maybe he is going to use it to control the nation’s food supply, offering his genetically-engineered fake foods like Future Meat to poison our population. Or, maybe he is planning on renting it out the government for the construction of internment camps to house all the people who refuse his COVID vaccine  and biometric immunity passport identification. So many possibilities, it boggles the mind. One thing’s for sure, Bill Gates is up to something, and none of it good.

FROM FOX NEWS: They own roughly 52,000 more acreages than the Offutt family, who sit at No. 2 on Land Report’s list of families who own the most farmland in the U.S.

In total, Bill and Melinda Gates have acquired land in more than a dozen states. However, his largest land holdings are in Louisiana (69,071 acres), Arkansas (47,927 acres), Nebraska (20,588 acres), Arizona (25,750 acres) and Washington state (16,097). According to Land Report’s research, Gates and his wife had hired former Putnam Investments bond fund manager Michael Larson in 1994 to help them diversify their personal assets.

These investments included a stake in AutoNation, the Charles Hotel in Cambridge, Mass., the Four Seasons in San Francisco and upward of 100,000 acres of farmland in various states, Land Report said, citing a 2014 profile of Larson in the Wall Street Journal.

However, Land Report’s latest findings show that the 100,000 figure has since surged to more than twice that amount.

Although Gates is widely known as the man behind tech behemoth Microsoft, he is no stranger to agriculture. Since the early 2000s, Gates and his wife have made the foray into the agriculture space through numerous investments to support farmers in the developing world.

In 2008, The Bill & Melinda Gates Foundation announced $306 million in grants designed to boost the yields and incomes of millions of small farmers in Africa as well as “other parts of the developing world so they can lift themselves and their families out of hunger and poverty.”

The foundation also teamed up with the Department for International Development (DFID) to support agricultural research projects in developing countries in order to help small farmers increase their yields and incomes. Roughly a year ago, Gates created the nonprofit Gates Ag One to further their goals of supporting agriculture in developing countries.