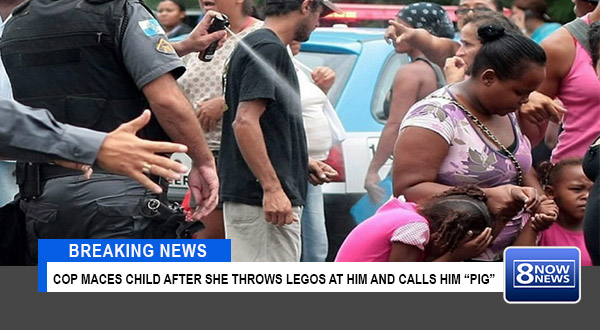 Rochester, NY – The usual tensions were high yesterday as protestors took their place during Donald Trump’s New York rally speech. Hispanics, African-Americans, and anti-Trump activists held up signs and chanted outside the meeting area with hopes to get their point across. Unfortunately, the protest took a turn for the worse when a mother and her two children passed by a police officer. That’s when one of the little girls decided to speak her mind about what she thought of police. 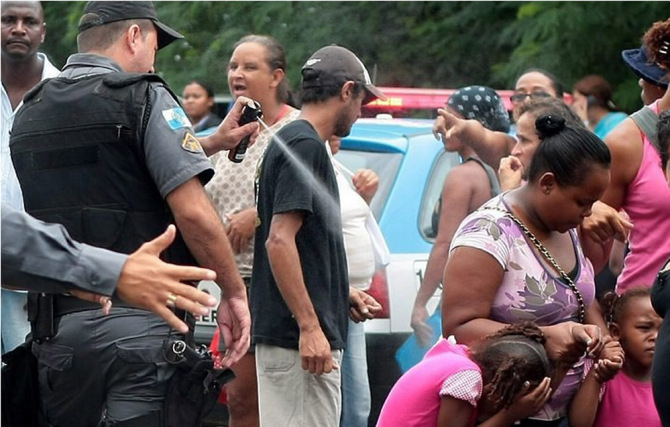 “I was walking behind the mom and her kids when I saw the little girl pull a Lego out of her pocket,” said Shauntee McPherson. “Then that little girl threw it right at the cops head! Then she called him a pig! I can’t believe what I saw and what I heard. That mom should be ashamed of herself! I mean, I don’t like cops that much myself. But damn! You don’t let your kids act like that.”

It was at that point the cop made his move without hesitation. He pulled out his mace and sprayed the little girl, 5 year-old Shawanda, directly in her eyes. According to eyewitnesses, he let it spray until another cop pulled him away and ordered him to stop. Other protesters tried to stop him as well, but they were taken down by surrounding police officers. In all, 10 people were arrested for trying to protect the child.

“If Donald Trump wins this election, we better get used to this type of treatment,” said Lida Salinger, head of the Hispanic Human Rights Movement. “As a matter of fact, you might want to stock up on water and food because we believe that if he is elected there is going to be a race war. Prepare yourselves and your family.”