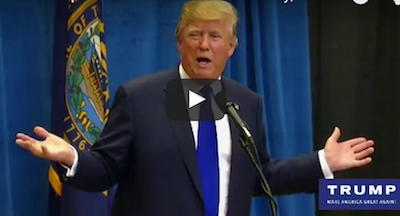 News 8 –  If you haven’t heard by now, two Boston men beat and urinated on a homeless Latino man after being inspired by GOP presidential front runner Donald Trump’s anti-immigrant rhetoric on which he has based a large part of his campaign. And make no mistake about it – Trump shoulders a huge amount of blame for inspiring this deplorable behavior. Without this incessant babbling by Trump, and the rest of the GOP for that matter, this homeless Latino man likely never would have been assaulted.

So, what was Trump’s reaction when he was asked about the attack? A quick condemnation of the disgusting nature of these two animals? A few comments to address the need for people to treat each other with respect even if we might disagree with one another? Or anything that remotely might sound like he gave a damn that two men brutally assaulted a homeless man???? NOPE…  that was not Trump’s reaction at all.

Instead, he claimed he didn’t hear about the attack – then went on to call his supporters “passionate” when it comes to their “love” of this country: “I haven’t heard about that. It would be a shame, but I haven’t heard about that. I will say that people who are following me are very passionate. They love this country and they want this country to be great again. They are passionate. I will say that, and everybody here has reported it.”

Basically, instead of addressing the fact that a brutal hate crime had been committed by two men who claimed to be inspired by him, he tried to shift the focus on the “passion” of his supporters. Granted he did say it’s a “shame” that the attack happened, but then almost seem to praise the “passion” that might have led these two bottom feeders to commit such a savage act of violence.

You can watch trumps comments below around the 8:27 mark in the video: