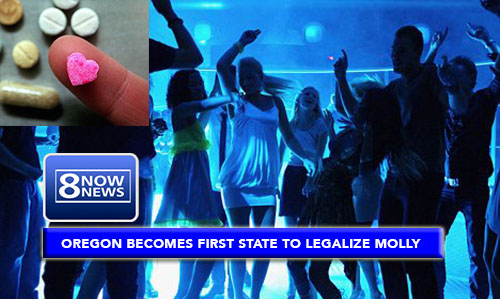 SALEM, OR –  Oregon has been in the news all year for legalizing marijuana for recreational use, and legalizing weed is only the beginning. Following on the heels of the wave of marijuana legalization, some might be surprised to hear that Oregon state legislature has decided to legalize the popular street drug ‘Molly.’ Recreational use of Molly will become fully legal in the state by the end of this year.

The decision was met with controversy but “no more or less than the original decision to legalize marijuana,” Governor Kate Brown stated. The state is still working out some guidelines and ground rules for suppliers, such as purity levels, permits, and health code requirements. While Kate Brown has only been governor for two years, her decision may come as a shock for many Oregonians. Governor Brown did not comment on whether or not she pops Molly herself.

One of the major points in making this decision came from the fact that so many unknown chemicals are being used when producing Molly. Unlike MDMA and other illegal drugs that have known effects on the body, the formulas for these synthetic drugs keep changing, and they are manufactured with no regard to how they affect the user. With it being legal, this allows our government to fully control, manufacture, and regulate the synthetic drug. This way, those who are popping Molly will know they are getting Molly in pure form through a trusted source, instead of the street dealer.

“By legalizing, monitoring, and taxing Molly, we will not only cut down on inmates and care costs, it will also open up a whole new job market,” Brown explains. “It’s a good situation all around, especially for taxpayers.”

Some of the decision’s most outspoken opponents, however, have been current drug dealers. “Making it legal is a terrible idea,” a dealer, who chose to remain anonymous, told KTNA News. “We don’t want regulated. We’re killing it stacking paper right now, but regular guys like me won’t be able to keep up with all the government regulations. This is gonna put me out of a job!”

Nonetheless, experts estimate this act will drop the state’s debt by as much as 50% in the first year. This may translate into tax cuts, more public projects, better road maintenance, and possibly even government rehabilitation programs for more dangerous drugs like cigarettes. “If they want people to not buy drugs legally, then for crying out loud they should shut down every Starbucks in the United States,” said Oregon Rep. Greg Walden. “Marijuana, Molly – what’s the difference? The revenue the state will bring in, it’s astronomical. Health is one thing, but were talking about money here.”