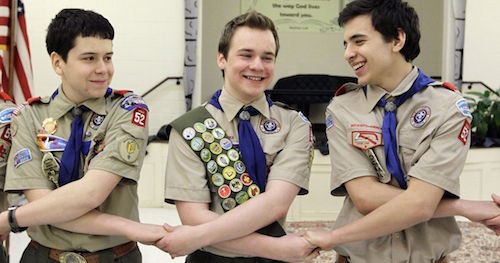 News 8 –  The government board of the Boy Scouts of America is expected Monday to lift its ban on openly gay employees and adult volunteers, a decision that is likely to keep the massive youth organization out of court that could divide it further. The proposal the executive board will take up comes two years after the group lifted its ban on openly gay youth, a dramatic step for an organization whose leaders went to the Supreme Court to fight accepting openly gay members. Some 70% of Boy Scout troops are run by faith-based organizations, many from Orthodox communities including Mormons, Catholics, Southern Baptists and Muslims who do not accept gay equality.

The scouts smaller executive committee, whose members serve on the larger executive board, voted unanimously earlier this month to permit openly gay adults to serve as leaders. At the time, the scout said in a statement that the resolution “will allow chartered organizations to select adult leaders without regard to sexual orientation.” The organization is facing investigations into its hiring practices by prosecutors in New York and Colorado.

But the resolution allows troops chartered by a religious organization – including churches, mosques and synagogues – to discriminate, and to “continue to choose adult leaders whose beliefs are consistent with their own,” said the Scout statement earlier this month. It’s not clear how these changes will play out in the years to come, and some conservative leaders say like-minded troops are moving away from the Scouts. Roger Oldham, a spokesman for the Southern Baptist Convention, noted Sunday that the scouts experienced a steep drop of more than 7% in membership after the youth ban was lifted in 2013.

Traditional groups, he wrote in an email, are braced for the possibility that soon, even church-based groups will be required to fully accept gay leaders. “The next step, which may be a year or two down the road, seems obvious to us,” he wrote.

However, the Mormon church, the largest group in scouting, and the Catholic Church have issued statements since 2013 affirming their desire to stay in Scouting – so long as they can continue to select leaders who reflect their teachings.