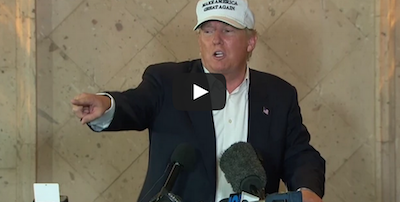 News 8 – Laredo, Texas – A defiant Donald Trump, visiting the US border with Mexico Thursday, said again that he will not apologize for his hard-line rhetoric on illegal immigration or back away from his plan to build a wall between the two nations. During a whirlwind visit – it was less than three hours from when his jet touched down to when it took off – Trump blazed around in a presidential style motorcade that included seven SUVs and even more police cars. Local officers blocked off roads, including Interstate 35, for Trumps entourage.

The Republican presidential candidate, leading the GOP field in national polls but increasingly under fire from the establishment wing of his party, said repeatedly that he had been told he would be in “great danger” if he visited this town of 236,000 in southern Texas – even though Laredo, which is roughly 96% Hispanic, has a significantly lower murder rate then trumps hometown of New York City. He would not say who had told him that he was at risk.

At the World Trade Bridge, were a long line of 18 wheelers queued up to enter into the United States, Trump spent half an hour meeting with local leaders – none of whom seemed eager to endorse his signature prescription for border security.

Speaking to reporters after the meeting, with the crossing as a backdrop, Laredo City manager Jesus Olivares said the border fence Trump has been calling for was not on their list of priorities. “We do not think that’s necessary at this time,” he replied, with Trump looking on.

Asked whether that opinion would have an impact on his own, Trump said nothing had changed, “Not at all. In certain sections, we have to have a wall.”

On a windy day with temperatures over 100°, drum for a blazer, white dress shoes and a white ball emblazoned with his campaign slogan, “Make America Great Again.”