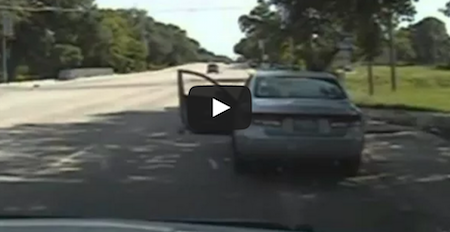 News 8 –  A woman whose death in a Texas jail has raised suspicions about the official conclusion that she hanged herself, told the guard during the booking process that she had tried to kill herself in the past, the sheriff said on Wednesday. Waller County Sheriff Glenn Smith told the Associated Press during a telephone interview that Sandra Bland told a jailer July 10 about a previous suicide attempt, while being asked a series of questions posed to each person booked into the jail. He did not provide further details about the conversation.

Asked about Smith’s assertion, the attorney representing Bland’s family, Cannon Lambert, said relatives have “no evidence” that she ever attempted suicide or had been treated for depression. It was not immediately clear why the department hadn’t previously disclosed details of conversations with Bland, or whether they were shared with other jail staff. It also was unclear whether Bland was on a suicide watch or otherwise initially monitored during her weekend incarceration. A second jailer also interviewed Bland, according to the sheriff. The 28-year-old black woman from Illinois said she was not depressed but was upset about her arrest, which occurred following a confrontation with a white officer who had stopped her for a minor traffic violation.

Smith says both jailers who spoke with Bland insisted that she appeared fine when being booked on a charge of assaulting a public servant. Bland’s body was found three days later in her cell. Authorities say she hanged herself using a plastic liner taken from a garbage can. Her death comes after nearly a year of heightened national scrutiny of police and their dealings with black suspects, especially those who have been killed by officers or died in police custody. Smith said Wednesday that no one gained access to the cell and contributed to Bland’s death. “My obligation is to run this jailing keep everyone safe,” he said.

Bland’s family has said she was not despondent and was looking forward to starting a new job at her alma mater, Prairie View A&M University. Lambert said Wednesday that Bland had just bought groceries and was ecstatic about her new job when she was pulled over. However, Bland posted a video on her Facebook page in March, saying she was suffering from “a little bit of depression as well as PTSD,” or post traumatic stress disorder. At least one friend has said she was just venting after a bad day.

The sheriff discussed plans booking process as her family held a news conference in suburban Chicago to discuss the release of video of her arrest taken from the officers dash cam, which shows him drawing a stun gun and threatening Bland when she refuses to follow his order. The roadside encounter swiftly escalated to a shouting confrontation, with the officer holding the weapon and warning Bland, “I will light you up,” for not getting out of her vehicle.

The video posted online Tuesday by the Texas Department of Public Safety shows the trooper stopping Bland for failing to signal a lane change. The conversation turns hostile when the officer asks Bland to put out her cigarette and she asks why she can’t smoke in her own car. The trooper then orders Bland to get out of the vehicle. She refuses, and he tells her she is under arrest. Further refusals to get out bring a threat from the trooper to drag her out. He then pulls out a stun gun and makes the threat about lighting Bland up.

When she finally steps out of the vehicle the trooper orders her to the side of the road. They are, the confrontation continues off-camera, but is still audible. Land can be heard protesting her arrest, repeatedly using expletives and calling the officer a “Pussy.”she screams that he’s about to break her wrists and complains that he knocked her head into the ground.

In response to questions about gaps and overlaps in the original post a video, authorities said the footage was not edited or manipulated. Tom Vinger, a spokes man for the Department of Public Safety, said glitches occurred in the recording when it was uploaded for public viewing, and the department has since uploaded again.

Plans death was resonated on social media, with posts questioning the official account and featuring the #JusticForSandy and #WhatHappenedToSandyBland. others referred to #SandySpeaks, the hashtag used in monologues she posted on Facebook in which she talked about police brutality and said she had a calling from God to speak out against racism and injustice. The trooper, who has been on the force for just over a year, has been placed on administrative leave for violating unspecified police procedures and the Department of Public Safety’s courtesy policy. The agency would not address questions about whether the trooper acted appropriately by drawing his stun gun or trying to pull Bland out of the vehicle.