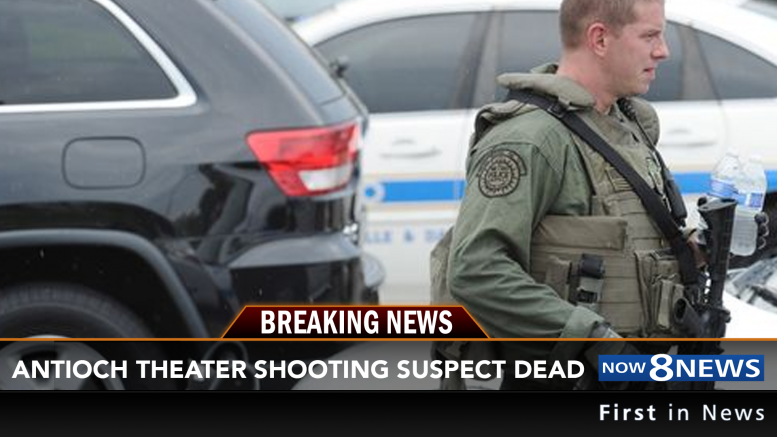 News 8 – Metro police say a 29-year-old male suspect who opened fire in a Antioch theater this afternoon first sprayed three victims with pepper spray, and also injured one of them with a hatchet.

Metro Police Chief Steve Anderson described the incident during a 6pm press conference. He said two officers were working a traffic crash nearby when witnesses told them of a problem at the theater.

Anderson said a third officer confronted the suspect inside.

“He saw a gun come up, he saw a trigger about to be pulled,” said the chief, “The officer backed down. The three officers got civilians safely out of the theater and a SWAT team was called.”

The suspect went to the back door of the theater and appeared “threatening,” the chief said. Officers opened fire, he said. The suspect died at the scene.

Police previously reported the suspect was 51 years old, but said most recently he was 29.

A sergeant outside the theater encountered two women, ages 53 and 17, who had been injured by pepper spray, officials said.  A third victim, 58, was also sprayed with pepper spray and suffered a superficial injury to his shoulder from the hatchet, officials said. All three victims were treated at the scene.

After the incident, police discovered two suspicious backpacks: One on the suspect and one left in the theater. By 4pm, they had detonated one of the bags. Police determined the bag strapped to the suspect’s chest contained a hoax device.

The incident was reported as an active shooter situation at 1:13pm. Police said the suspect was dead at 1:54pm.

Officers first entered the theater through the projection room and engaged the suspect in gunfire. The suspect, was wearing a surgical mask at the time.

“The officer started at the projection room and started clearing down,” Aaron said, “He encountered the gunman. The gunman opened fire on the South Precinct officer. That officer returned his fire, and then backed away out of the theater.”

“There was gunfire and the gunman is deceased just inside the movie theater,” he said, “so we believe the imminent threat has been ended.”

“Unfortunately, the more people that have guns in public places, the more potentional there is for someone who shouldn’t have a gun to use it inappropriately,” Slovis said.

About 20 witnesses were being interviewed by police off-site.

At least one theater patron took to social media to describe the frightening experience.

Pam Wright, who said she was inside the theater during the shooting, posted on Facebook she was “shocked.”

“Kids having to see the evil that exists in this world up close like this is tragic… heard a child crying saying, “Is the boogie man still here?”, she wrote.

Wright said she had given a statement to police.