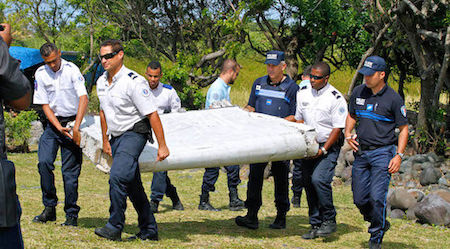 News 8 –  Malaysian Prime Minister Najib Razak said Thursday that experts in France have determined that a barnacle encrusted airplane wing fragment found on Reunion Island belongs to Malaysia Airlines flight 370 – the latest twist in the exhaustive search for the plane that vanished in March 2014. Razak said at a news conference on Wednesday that “an international team of experts have conclusively confirmed that the aircraft debris found on Reunion Island is indeed MH370,” according to the Associated Press.

“We now have physical evidence that, as I announced on March 24 last year, flight MH370 tragically ended in the southern Indian Ocean,” Razak added. He also reiterated that his country’s government is committed to finding out what happened to the Boeing 777 jetliner, which appeared off course during a flight from Kuala Lumpur to Beijing.

All 239 passengers and crew aboard the flight are presumed dead. About two thirds of those on the plane were Chinese. “The burden and uncertainty faced by the families during this time has been unspeakable,” Razak said. “It is my hope that this confirmation, however tragic and painful, will at least bring certainty to the families and loved ones of the 239 people aboard MH370. They have our deepest sympathy and prayers.”