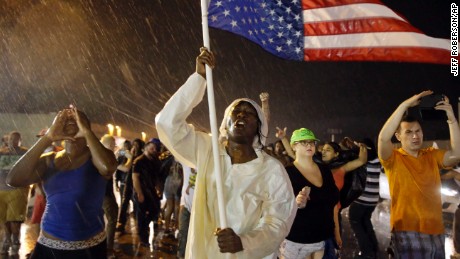 News 8 –  A day of civil disobedience that saw several arrests in Ferguson ended Monday with some protesters throwing rocks and bottles at police. The St. Louis County police said frozen water bottles were thrown at officers, prompting them to order the crowd to disperse or face arrest. “Safety, our top priority, is now compromised. This is no longer a peaceful protest. Participants are now unlawfully assembled,” the department tweeted. About 23 arrests were made late Monday and early Tuesday, police said.

Police chief John Belmar tried to de-escalate the tension by speaking with some demonstrators, who then moved from the street to the sidewalks. However, others seethed as word spread that police had arrested a 12-year-old girl. Police contended she was 18, citing her ID. More controversy arose as well over a pair of arrests made last year in the wake of protests over Michael Brown’s shooting death: those of The Washington Post’s Wesley Lowery and the Huffington Post Ryan Reilley, who were briefly detained after being told they were trespassing as they worked in a McDonald’s along the protest route.

St. Louis County on Monday, 363 days after their arrests in two days shy of the statue of limitations, charge the reporters with trespassing and interfering with a police officer. Both news outlets cast the arrests as gross First Amendment violations at the time, and they maintained that team in Tuesday’s response. Marty Baron, executive editor of The Washington Post, called the charges “outrageous,” while Huffington Post Washington Bureau chief Ryan Grim said it was police who committed crimes by assaulting reporters during “violent arrests.” The National Association of Black Journalists called the charges “a direct assault on the free exercise of the First Amendment.”

St. Louis County officials declared a state of emergency, saying violence had marred demonstrations marking the one-year anniversary of Brown’s death. “The recent acts of violence will not be tolerated in a community that has worked so tirelessly over the last year to rebuild and become stronger,” St. Louis County executive Steve Stenger said in a statement.