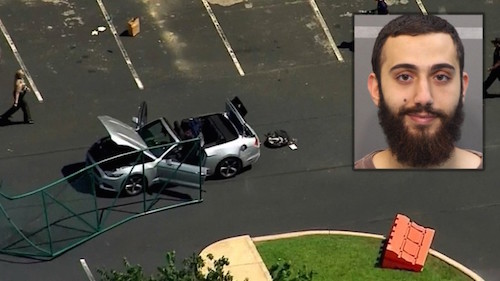 News 8 Breaking News Alert –  The suspect Mohammed Youssuf Abdulazeez was carrying 30 round magazines when he opened fire, according to a source briefed by law enforcement. Abdulazeez Kept police at bay for some time with the amount of ammunition he had.

The shooting suspect was armed with an AK-47 style weapon at the time of the attack according to two law enforcement officials briefed on the investigation.

The suspect shooter Mohammed Youssuf Abdulazeez, 24, is dead, the FBI said. But, publicly at least, investigators haven’t said much more about him.

Witnesses saw Abdulazeez spray a hail of bullets at the glass door of the military recruiting center in a strip mall. Then the gunman, who according to a law enforcement official was driving in a rented silver Ford Mustang convertible, moved on to his next target more than 7 miles away: a Naval reserve center.

There, he rammed into a gate at some point during his shooting rampage and was eventually killed by police, a US official said. Now, with the FBI in the lead, a terrorism task force is investigating.

A key detail will help them make that determination: finding out the suspects motive.

In the neighborhood where Abdulazeez is believed to have lived, police cars and an ambulance were on the streets. Residents were blocked from reaching their homes. A woman was escorted in handcuffs from the area, but it was unclear whether she was connected to the alleged gunman.

“We will treat this as a terrorism investigation until it can be determined that it is not,” Reinhold said.

US Atty. Bill Killian earlier told reporters that authorities were treating the shooting as an “act of domestic terrorism.”