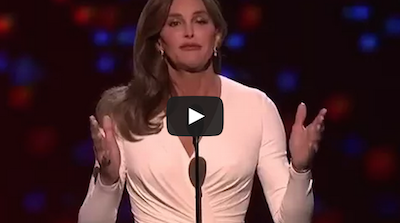 News 8 – Caitlyn Jenner Highlighted the challenges transgender people experience as she accepted the Arthur Ashe Courage Award at the ESPY’s on Wednesday night.

She added, “If you want to call me names, make jokes and doubt my intentions, go ahead because the reality is I can take it. But for thousands of kids out there coming to terms with the reality of who they are, they shouldn’t have to take it.”

Jenner said she hoped her story could change attitudes about trans people. “Trans-people deserve something vital, they deserve your respect,” she said. “From that respect comes a more compassionate community.”