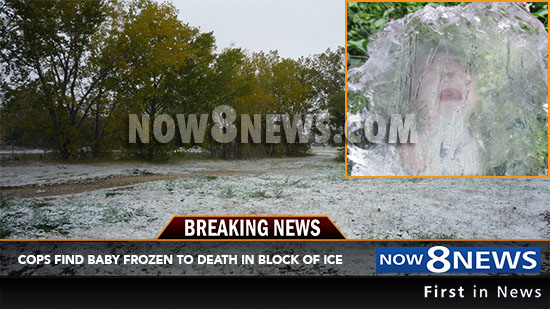 Jackson, TN –  A hunter found a gruesome discovery in the Tennessee woods on Monday while he was setting squirrel traps. Travis Wilbert Lee, 28, was tracking through the forest on his weekly squirrel hunt when he discovered a large block of ice with something strange inside of it. As he got closer, Lee said he could not believe what it was.

“I thought it was a doll at first,” said Lee. “But when I got closer and really looked at the thing, I realized it was a darn baby. I mean, how the hell did that thang get all the way out here all by itself? I guess someone dumped the poor kid. That’s too bad cause me and Martha Lynn have been tryin’ to get pregnant for three years. We woulda tooken the tot.”

Police say there were no other tracks besides Lee’s that led to the location where the baby was found. After defrosting the child, they found the baby still had his umbilical cord attached. They have come to the conclusion that the mother abandoned the baby right after it was born. They will wait for autopsy results to reveal whether the child was stillborn or left in the woods alive to freeze.