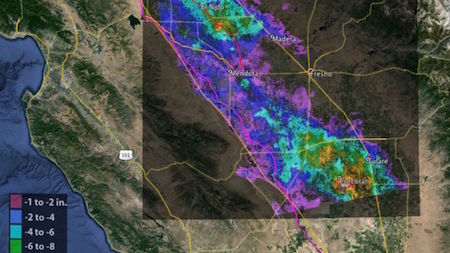 News 8 –  Some areas of the Golden State are sinking more than 2 inches per month, the imagery reveals. Though the sinking, called subsidence, has long been a problem in California, the rate is accelerating because the state’s extreme drought is fueling voracious groundwater pumping.

“Because of increased pumping, groundwater levels are reaching record lows – up to 100 feet lower than previous records,” Mark Cowin, director of California’s Department of water resources, said in a statement. “As extensive groundwater pumping continues, the land is seeking more rapidly, and this puts nearby infrastructures at great risk of costly damage.”

This furious groundwater pumping could have long-term consequences. If the land shrinks too much, and for too long, it can permanently lose its abilities to store groundwater, the researchers said. The state’s shrinking isn’t new: California has long suffered from subsidence, and some parts are now a few dozen feet lower than they were in 1925, according to the US geological survey. But the states worst drought on record – 97% of the state is facing moderate to exceptional drought – has only accelerated the trend.

Certain hotspots are shrinking at an astonishing rate – regions of the Tulare Basin, which includes Fresno, sank 13 inches in just eight months, they found. The Sacramento Valley is shrinking about 0.5 inches per month. And the California aqueduct – an intricate network of pipes, canals and tunnels that funnels water from high in the Sierra Nevada Mountains in northern and central California to Southern California – has sunk 12.5 inches, and most of that was just in the past four months, according to the new study.