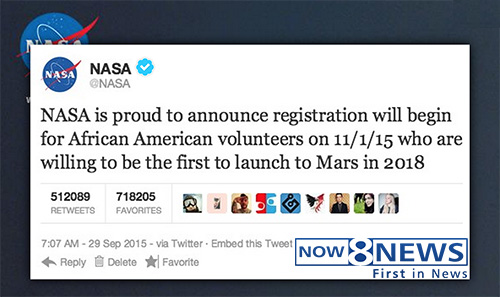 News 8 – In a very controversial move by NASA, they have announced their pre-registration for the first launch onto the red planet in 2018. Their potential recruits – African American citizens of the United States. Civil rights leaders are questioning this move by NASA and comparing it to the previous “relocation” of African-Americans from their homeland in 1619, which turned into what we know today as slavery.

NASA responded by saying they are only following the affirmative action law which requires them to “Not discriminate against any employee or applicant for employment because of race, creed, color, or national origin.” NASA released this statement about their new application process that is slated only for African-Americans: “African-Americans have been treated like second-class citizens since they were brought to this country in the 1600’s. Here at NASA, we believe that it would be a historical move to have the first person to set foot on Mars to be an African-American. We had our first African-American president, but we need to do much more than that. We owe it to them and the history books, to bring a positive message that no matter what your race or religion there is nothing that you cannot do!”

However, civil rights leaders are not falling for what they call ‘lies’. Al Sharpton has called for a protest and is urging his black people to NOT apply for this mission. “This is the rich white man’s way of getting the black people off the planet. Don’t you see what’s happening? They did it to us in Africa, but they are NOT going to do it to us again. You can fool us once, but you can’t fool us twice.”

What is your thought on NASA’s new announcement. Is it an opportunity or an attempted extermination of the African American race in America?