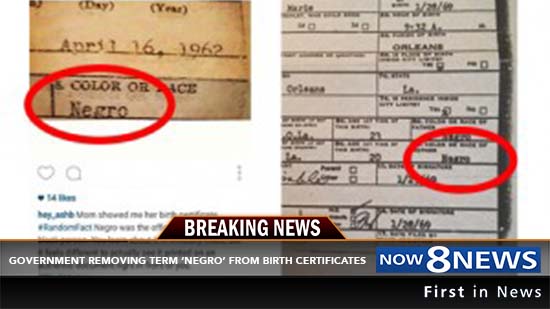 News 8 –  From the early 1900s to the early 1980s, the birth certificate of an African American child was labeled with the term “Negro.” As early as the 1700’s, a child with at least 1/4 “negro blood” (mixed) was labeled a “mulatto.” That term carried on through the 1940s. Currently, there are over 22 million birth certificates in the United States still labeled as “Negro” –  a term that was taken out the pits of slavery.

On Monday, the Supreme Court signed an amendment to the U.S. National Center for Health Statistics laws to make it mandatory for them to change every birth certificate on record that labels and African American citizen as a “Negro” or “Mulatto.” According to analysts however, this is putting a huge dent in the national deficit. Considering the labor, printing, postage and servicing, this is going to run the taxpayers nearly $100 million.

But from the view of this African-American man, Clifford Reynolds, this move was long overdue. “I was born in 1968, and my birth certificate say Negro. I’m not a damn Negro, I’m a black man. I got the right NOT have that racist word on my birth certificate. And do I care about the cost?? Hell No!! They owe us reparations anyways.”

James Moore, an Imperial of the Loyal White Knights (KKK) says they plan to picket the White House to show their disgust over this new amendment.

Moore had plenty to say about his thoughts on changing over 22 million birth certificates from the term “Negro” to African-American. However, his comments were so extremely racist that we can’t even quote them in this article.

Let’s just say he does not agree with the change. One thing he did say is that if they plan to riot over this injustice, “We won’t do it in our own neighborhoods like those dumb n***rs. We’re going to loot in Compton.”

The US National Center for Health Statistics plans to have all for certificates adjusted by end of summer.