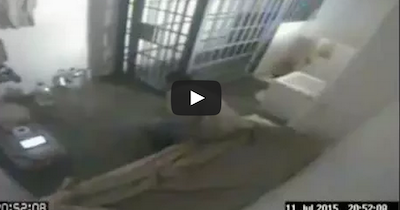 News 8 –  First he ducks into the shower of his prison cell, fully clothed. Then he leans down, but it’s not clear what the infamous Drug Lord is doing; the short shower wall blocks him from the surveillance camera.

Seconds later, Joaquin “El Chapo” Guzman gets back up, sits down on his cell bed and changes his shoes. He goes back into the shower and then down again behind the wall – but never resurfaces.

Guzman, Mexico’s most notorious drug kingpin, slips through a hole under the shower and escaped through a mile-long tunnel to freedom, authorities said.

And the newly released closed-circuit video shows how calmly and easily he did it.

Mexican Interior Minister Miguel Angel Osorio Chong said Guzman’s cell was videotaped 24 hours a day. But the surveillance had to blind spots for privacy – the toilet and shower.

Guzman had a bracelet that monitor his every move, the interior minister said. But he left the bracelet behind before he crawled into the tunnel.

The video below shows the exact moment of his escape.