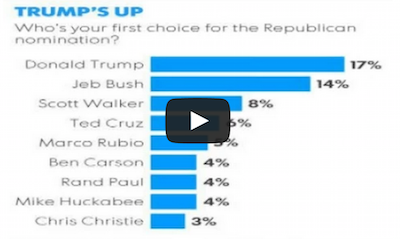 News 8 –  Donald Trump, searching in the polls, arrived at his lakeside enclaves and trained his eye on perhaps the only target that aggravates his supporters as much as the Obama administration: Republicans.  “They’re all talk, there no action,” Trump said, revving up his fiery takedown of politicians. “I’m more disappointed in many ways with the Republicans,” Trump said. “They have this great indignation, whether it’s Benghazi or the emails. Nothing ever happens.”

Trump is enjoying the summer surge as he takes the lead in a poll of Republican presidential contenders released on Friday. The billionaire businessman is offending Hispanics and irking his GOP competitors but it’s clear that his in-your-face demeanor and willingness to take on Pres. Barack Obama – then just as quickly turn his sharp tongue toward members of his own party – is winning over Republican voters.

“Even though I’m a Republican and I’m obviously voting that way, I’m very disappointed in the Republicans in the House. There’s weakness there,” said Julie Pagliarulo, a 56-year-old resident of Belmont, New Hampshire who arrived hours early to see Trump speak. “Donald just says it like it is. I love it.”

Friday’s Fox news poll found Trump leading with support from 18% of Republican primary voters nationwide, compared to 15% for Wisconsin Gov. Scott Walker and 14% for former Florida Gov. Jeb Bush. Statistically speaking, the top three candidates are within the margin of error, and therefore tied – a point Trump tends to leave out of his speeches.