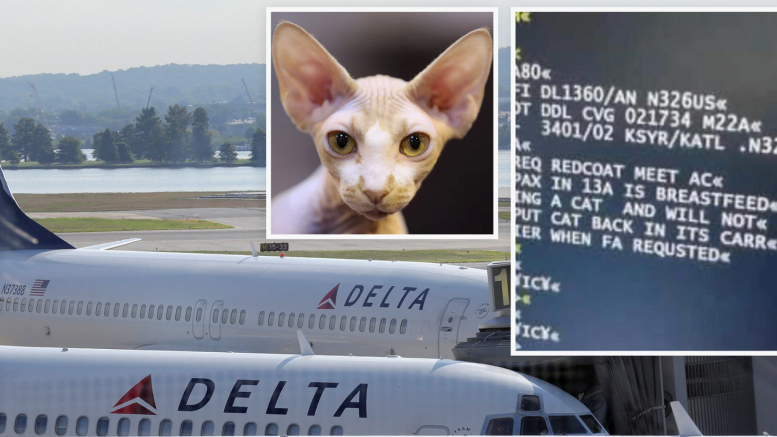 A woman who took a Delta flight recently wasn’t kitten around when she whipped out her breasts and started feeding her hairless cat.

The unidentified female flew from Syracuse, NY, to Atlanta, GA, where she was caught breastfeeding her feline on the plane. A flight attendant told her repeatedly to stop and put her cat back in its cage, however, the woman refused.

A message was sent through the Aircraft Communications Addressing and Reporting System (ACARS) to alert Delta crew in Atlanta that a passenger in seat 13A “is breastfeeding a cat and will not put cat back in its carrier when [flight attendant] requested.”

A photo of the message board was found on Reddit and was posted on Twitter by author Rick Wilson.

Flight attendant Ainsley Elizabeth, who was on board during the incident, took to TikTok on Nov. 13 to explain more of what went down, Newsweek reported.

“This woman had one of those, like, hairless cats swaddled up in a blanket so it looked like a baby,” she said. “Her shirt was up and she was trying to get the cat to latch and she wouldn’t put the cat back in the carrier. And the cat was screaming for its life.”

Elizabeth revealed in another video that security got involved. However, she’s unsure of what happened to the woman and her cat once the jet touched down in Atlanta.

The Delta employee who sent the ACARS message also requested that Delta’s Red Coat team apprehend the woman once they got to the ground. Red Coats are “the elite airport customer service experts, identifiable by their bright red coats. They are specially trained to handle on-the-stop customer issues,” according to Delta’s website.

The airline’s website also outlines its policies of women breastfeeding children. “Delta fully supports a woman’s right to breastfeed on board Delta and Delta Connection aircraft and in Delta facilities. Breast pumps are allowed on board. At the airport and if you prefer, many airports do offer private lactation rooms or spaces,” the policy states.

Delta allows animals such as small dogs, cats and household birds to board domestic flights and “must be able to fit in a small, ventilated pet carrier.”